We pride ourselves in offering the best of classes for all our students. All of our instructors are highly experienced and qualified in a range of Martial Arts. Warriors TMA Academy offers classes 6 days a week and our membership packages will give you great access to the classes. We offer a free Complimentary class to all our new users in a class of your choice.

Our Team of professional instructors also offer Personal Training sessions that are tailored to meet your personal needs.

We host a number of seminars throughout the year from former UFC Fighters & coaches such as Erik Paulson, Ben Jones and also Muay Thai World Champion Liam Harrison.

If you want to some one-on-one training we have you covered. Our team of professional trainers are also available for personal training sessions.

Classes For All Abilities

We know it can be difficult when choosing a gym to train in. We want you to have the best environment and feel comfortable. Our aim is to help you achieve your goals and we have the best knowledge and experienced instructors who will help you. Our Team will guide and help you through your training journey and are always available to provide you with fitness, motivational and training advice. 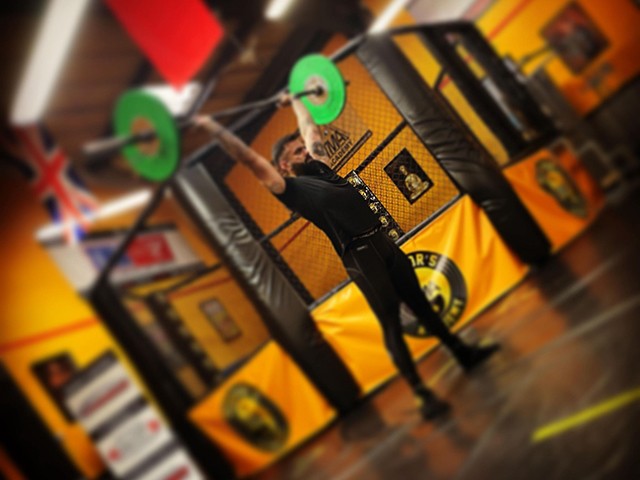 A form of high intensity interval training, the Warrior’s Workout Class is a strength and conditioning workout that is made up of functional movement performed at a high intensity level.

These movements are actions that you perform in your day-to-day life, like squatting, pulling, pushing etc. Many workouts feature variations of squats, push-ups, and weight lifting that last for predetermined amounts of time to help build muscles. This varies from a traditional workout that may tell you how many reps to do over any period of time.

The Warrior’s Workout’s are so effective because of their emphasis on the elements of load, distance and speed, which help participants develop high levels of power. The workout may utilize different equipment to accomplish this, including kettle bells, rowers, bikes, medicine balls, speed ropes, rings and plyo boxes. 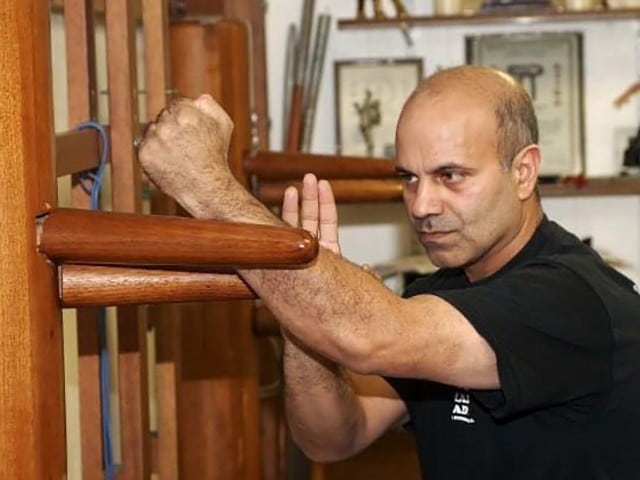 Jeet Kune Do (“JKD”) is not a style onto itself. Rather, it is the system of philosophy and concepts developed by SiJo Bruce Lee and continued by Guro Dan Inosanto. With Wing Chun at the core of his system, Bruce Lee incorporated a modification of various techniques from martial arts from all over the world. Innovative and radically ahead of his time in his training and teaching methodology, Bruce Lee developed a martial system and fighting strategy that has lost none of its effectiveness over time.  Emphasizing the “ranges of combat”, students are taught to confidently flow from long-distance kicking range to middle distance (“hand range”), to close quarters (“trapping & grappling range”). The movements are crisp and efficient, utilizing the most direct lines and angles.  JKD affords the practitioner a means by which to effectively pursue the most direct line of attack.  Once an attack has been launched there are no breaks or interruptions.  As one technique nears to completion, it starts to blend into the next and so forth; techniques become one continuous flowing motion until the conflict is resolved.

Jun Fan or Lee Jun Fan is the Chinese name of Bruce Lee. As a set curriculum, Jun Fan may be limited to specific techniques and training, while Jeet Kune Do has no such limitation.  While Jun Fan is one tool that can be used to train the principles and concepts of JKD, it is not the only one.

The Jun Fan Gung Fu / JKD Concepts classes at the Total Martial Arts Academy in Coventry are devoted to teaching and preserving the arts and philosophies of the late Bruce Lee.  Students are able to enhance their natural attributes, such as coordination, timing, speed, endurance, strength and agility, using the innovative teaching and training methods developed by Bruce Lee, and preserved and taught to us by his protégé, student and training partner, Sifu Dan Inosanto. 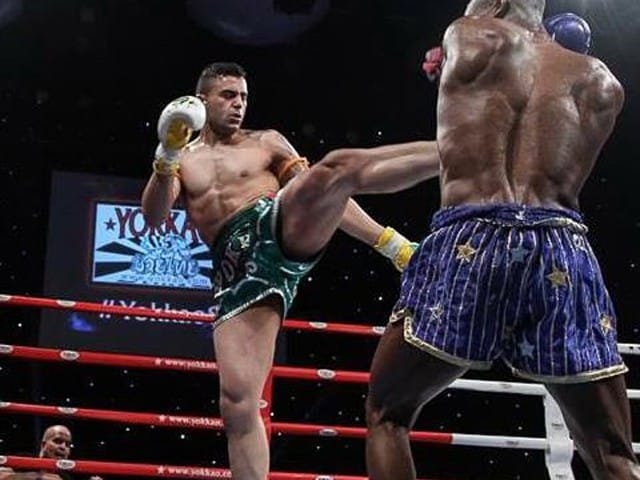 This amazing sport from Thailand is excellent for competition fighting, self-defence and staying in shape. In Muay Thai you train your hands, feet, elbows and knees to attack and defend, hence the reason behind the term “The art of Eight Limbs”.

Muay Thai also has lots of clinch-work, sometimes called neck wrestling or vertical grappling. Clinch-work is an art onto itself; it’s very effective both inside and out of the ring. Thai Boxing training sessions can be very tough and enjoyable but then again in any training you get out what you put in – the rewards are life changing. 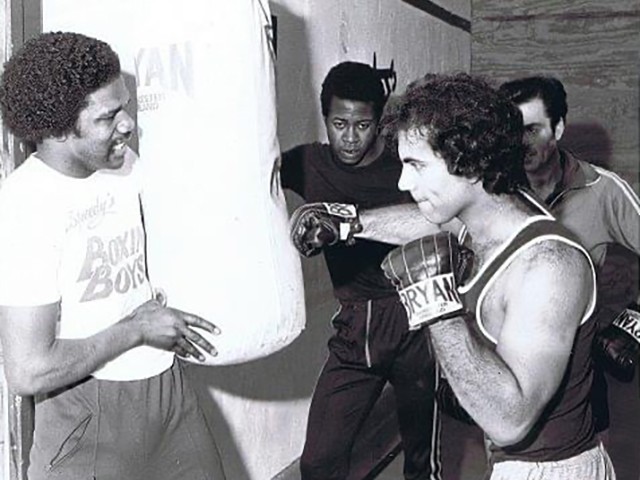 Class that encompasses the technical aspects of boxing with core strengthening exercises. Learn boxing skills such as correct form in throwing jabs, hooks and uppercuts, while working at an intense pace. Push yourself to the limit and find the champion within you! All fitness levels. 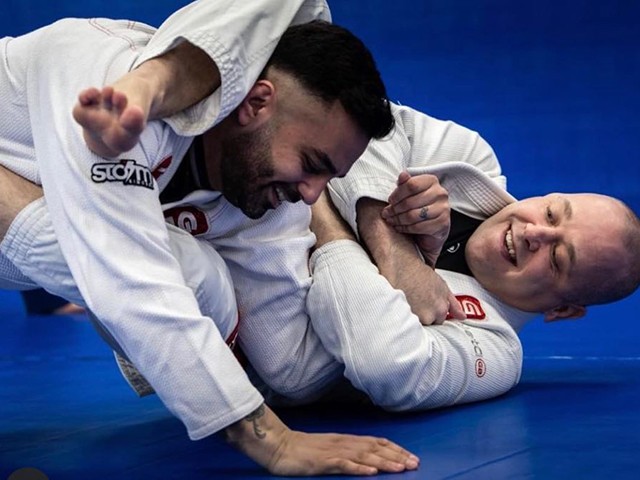 Brazilian Jiu-Jitsu or BJJ is a martial art based on grappling and ground fighting, focusing on the skill of controlling one’s opponent through techniques that force him or her to submit. It prides itself in being known as the “gentle art”, allowing a smaller, weaker person to use leverage and submissions (chokes, locks) to defend himself against a bigger opponent. With origins in Judo (Newaza) and Japanese Jujutsu, it has since been adapted and modified by Carlos Gracie and his family to become the martial art it is today.

The popularity of Brazilian Jiu-Jitsu (BJJ) has been on a steady rise over the years, thanks to the growing audience of MMA. Typical Brazilian Jiu-Jitsu jargon such as “rear naked choke”, “armbar” and “guard” have even become common vocabulary even among non-practitioners. 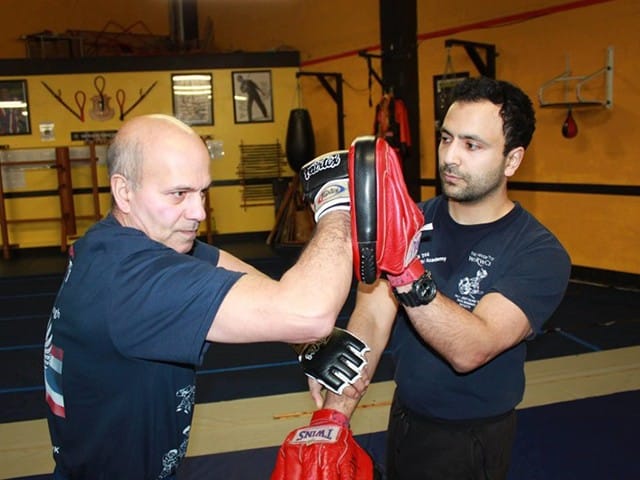 Sometimes called ‘Dirty Boxing’, Panantukan (Filipino Boxing) (pan-nan-too-can) is the Filipino Boxing system. This method is traditionally used as a back-up system for the weaponry. At the Total Martial Arts Academy you will see it featured as a primary system. Many people want to learn the empty hand system for self-defence, health and skill development from Kali.  The self-defence skills are obvious from the first day. The health benefits are felt over time as you train both sides of the body and progressively get in better shape.

Stress relief, weight loss and true martial art skill are just few of the benefits of these classes.

The weaponry then helps develop the movement and coordination to perfect the empty hand art. In this class you will be taught a wide variety of strikes. Panantukan uses all possible portions of the hand and fist as well as the elbows, shoulders, hips, knees and feet for striking. Sometimes called ‘dirty boxing’, Panantukan’s self-defence applications are easily apparent.

Stop in to experience a fun and challenging workout that will teach you valuable self-defence skills and martial arts forms. 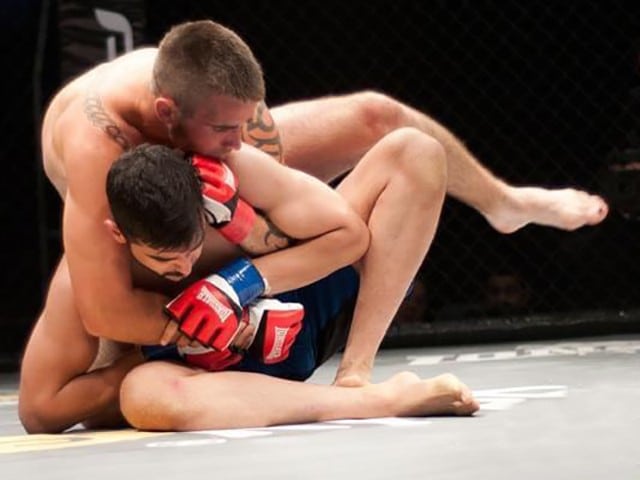 A mix of Shooto (Shoot Wrestling), Muay Thai, Boxing, Savate, Sambo, Brazilian Jiujitsu, freestyle and Catch-as-Catch -Can Wrestling, the curriculum can be taught to any level and is extremely effective. You will develop both your standing and ground game in this class and learn to effectively transition from one range to the next.

Warriors TMA Academy offer classes exclusively on CSW each week and also has incorporated this trademarked curriculum in its Grappling Phase. 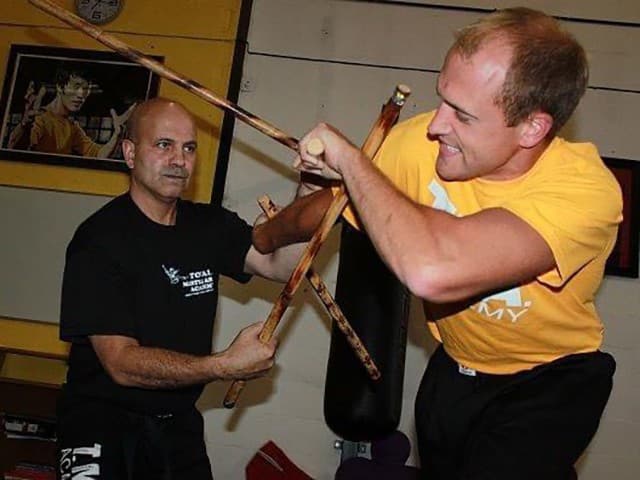 Kali is an ancient word that serves as an umbrella term for all the Filipino martial arts. The word itself translates as the study of body motion. There are many other names for these arts such as Escrima, Arnis or Arnis De Mano. Although the base of the system is weaponry, it’s empty hand systems feature some of the most sophisticated techniques and training methods in existence.

The weaponry training covers a wide spectrum featuring stick, blade and knife as well as flexible weapons and weapons of opportunity.  The art of Kali is renowned for its stick and blade fighting techniques and knife defence.

Weaponry training in our Kali classes emphasizes safety first. Movements are broken down into easily learned segments. You will be given the ability to perform techniques such as counters, disarms, sweeps and locks in flow.

Kali is famous for its flow drills that are both fun and give a real feel for the movement and speed of combat. 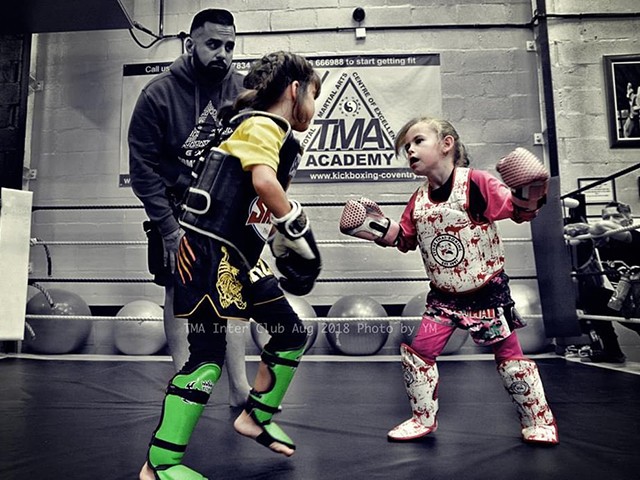 Your First Class is on Us

We offer a free Complimentary class to all our new users in a class of your choice. To arrange your first visit please hit the button below and tell us which class and when you would like to attend.

At Warriors TMA Academy We offer membership options that will suit everybody. Take a look at what we offer below.

Starting from £29.99 we offer a range of different membership packages.

Starting from £25.00 we have a choice of membership options that are suitble to juniors.

We also offer a membership package for use of our gym and workout classes only.

“Pindi Madahar is what I like to call a “Faith Restorer”. All to often, particularly in Mixed Martial Arts you come across the ego’s the fame hungry and the wrong sort all together. Pindi is everything that is right in a person, where manners, humility and respect come first, “He Restores my Faith”. You are what you have been brought up to be and in Pindi that is testament to Lucky Madahar & Pushpinder (Mum &amp; Dad).
If you are looking for a place to learn from the heart then you could not go far wrong with Warrior’s TMA Academy. Lucky & Pindi truly are two of the nicest guys I will ever meet in my entire life”.

"I would like to recommend Warrior’s TMA Academy in Coventry, my son Macauley Coyle has trained there for nearly 4 years. With instructors Lucky Madahar and his son Pindi ‘The Warrior’ Madahar, his attitude towards his school work has improved to be top levels results; I think this has a lot to do with his concentration levels from his training in Muay Thai, such a friendly place to be to learn martial arts. Macauley has achieved so much since his time at the WTA, he started pro fighting for the fight team at the WTA, in the last year he has won both English and British ISKA titles in which I am very proud of him and his
team at the Warrior’s TMA Academy, without the great training he receives he would not be at this level at the age of just turning 16, Warrior’s TMA Academy in Coventry
is the place to be – Cheers!"

"Just started training again at the WTA and it’s given me a new lease of life! I’m feeling stronger & fitter, and dropped 5 pounds in weight that I’d gained during lock down. Pindi’s Warrior Workouts are tough but rewarding, and his technical advice in Muay Thai, boxing, CSW and BJJ raises the skill-set up another level. He radiates positive energy & passion, constantly challenging & motivating everyone. Lucky brings a lifetime of experience & knowledge to the Kali/JKD classes. The gym is always clean & super-organised - without a doubt, the best gym I’ve ever been to!"

Free First Class of your choice